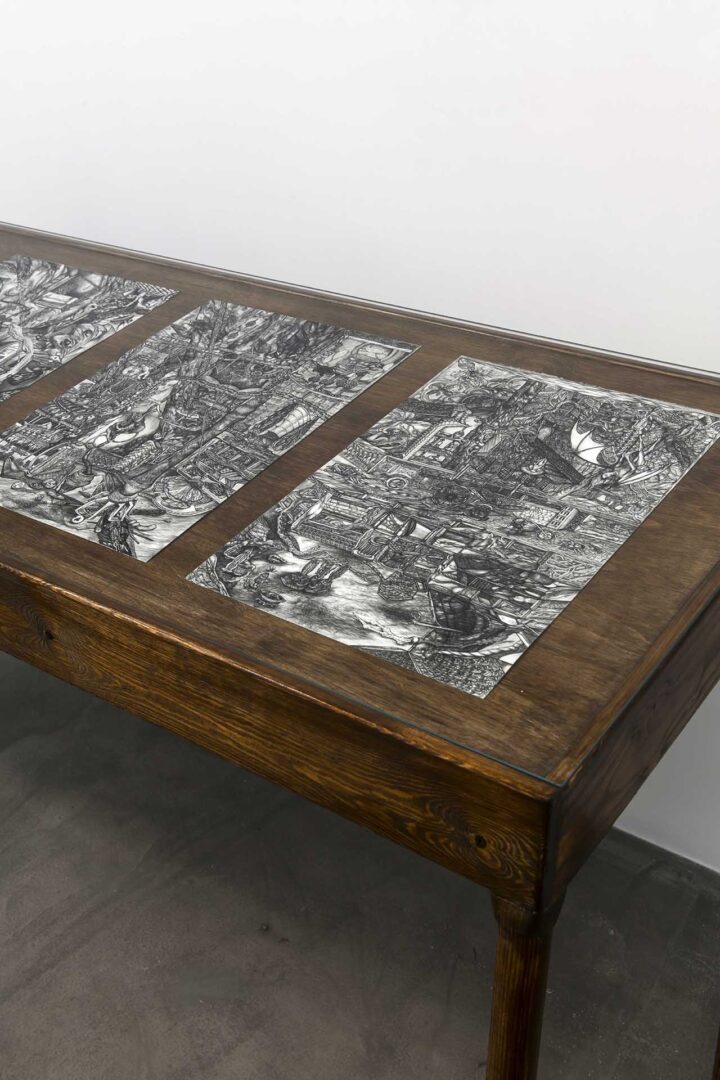 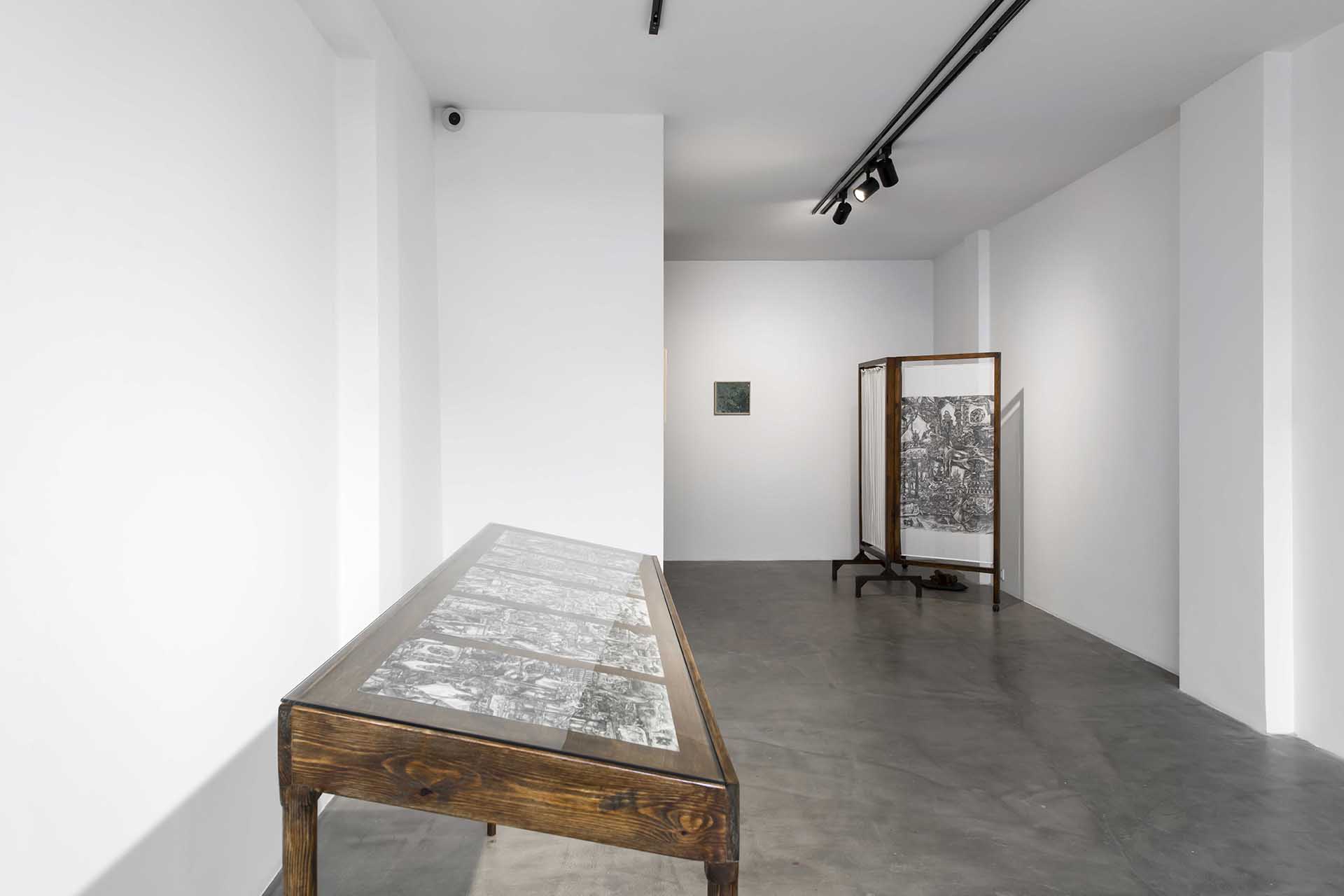 “Every day we descend a step further toward Hell,
Without horror, through gloom that stinks.”
(Charles Baudelaire, Flowers of Evil)

Art itself is the main creative field that has the power to save us from the claws of the truth which has anchored itself in the history of humanity. Mysterious and evil roads must be taken in order to arrive here. An artist can take this road only if he can direct destructiveness (devastation) towards his own nature and self. He has to destroy everything and then reconstruct it all again and again. So the artist who descends on earth and pursues his desires fans the flames of hell which is full of sinners instead of soothing in cold rivers his anger towards truth and falsehood. It is Dionysos’ music that seduces him. Just like Thomas Mann’s cursed composer and Doctor Faustus’ main character Adrian Leverkühn who intentionally sleeps with a prostitute to catch syphilis, an illness which gradually decays his brain, and makes a deal with the devil in order to create “wonderful and magical musical images.”1 Only this extremism could separate the 1 soul from the body, health from disease, and good from evil.2 The more the artist stays close to 2 evil and destruction, the more he would be able to move this corrupt world.

In this sense, the “heart of darkness” which Sadık Arı has created within contemporary art, converts us to an audience of tragedy which could see the terrifying mysteries of the world – faustian pact emerges as a condition of the affirmation of life- within the obligation it imposes. The moment a member of the audience sets a foot on Along the Wave, the agreement of this pact becomes inevitable.

We can refer to William Beckford’s novel Vathek3 in order to perceive better the hell of Sadık Arı who has created it with all its details. In this story which is dominated by darkness and agony and where Apollonian light stands against Dionysiac will, the faustian pact which provides basis for the novel Doctor Faustus reappears. Through art, this reappearance utters the good news that Vathek was waiting for in the tower of Babel that reaches up to the seventh heaven. [in Islamic belief, the seventh heaven is the highest of all heavens, it is where God dwells] If we think that the 18th century authors including William Beckford were deeply influenced by a series of etchings called Le Carceri d’Invenzione [The Imaginary Prisons] which is made by Giovanni Battista Piranesi; it is inevitable to say that this reappearance continues within Sadık Arı’s series Along the Wave. Goethe had travelled to Rome while dreaming about these etchings.

A unique man who comes from an unknown land helps Khalifa Vathek for the miracle he kept waiting to come true, yet this assistance was conditional; Vathek is expected to abandon the Islam and hand himself over to the dark forces. If he makes this deal, he will have all the promised treasures, talismans that bring the whole world to heel, sultans that came before Adam and the palace of subterranous fire in which he could watch all of Solomon’s crowns. This terrifyingly ugly stranger heralds a tragic and disruptive epoch. For this epoch to come, all moral values have to be destroyed. Socratic wisdom will lose its meaning and save us from our own nature.

While Along the Wave promises us these treasures just like the tower of Babel that pierces eternity, what kind of a deal Sadık Arı forces us to make? First, we have to comprehend the state Nietszche referred as decadence if we are to look for an answer to this question. “The state of decadence is a symptom of downfall which is built by humankind, the creator of values.”4 While this state bears a negative meaning in Nietszche, it also indicates an obligation for the novice to rise. In this state of decadence, only a strong decadent/artist can emerge and unmask the truth. Because of this, the situation of decadence is inevitable. It is the first step to take towards going beyond the self.

Along the Wave is a clear expression of this inevitablity. While we are getting drunk with Dionysos’ melodies and celebrating our coming together with talismans, the earth suddenly shatters apart and we fall down deep into the palace of subterranous fire through an abyss. This journey which we have similarly seen in Alice in Wonderland, is surprisingly long. The place we finally arrive is the hell of sinners who cover their burning hearts with their hands. A much more horrifying hell than Dante Alighieris’. In the middle of this subterranous empire where horror becomes dust in people’s tongues, Sadık Arı tells us that the true origin of an artwork lies beneath the ability of enduring great pain.5

While the world is being divided and reborn in Sadık Arı’s works, this novelty brings along the obligation to split up and to be reborn again. There – the art and the artist; who is cursed and syphilitic, made a deal with devil to obtain Solomon’s treasure, breaching into eternity and stability like the tip of the tower of Babel.