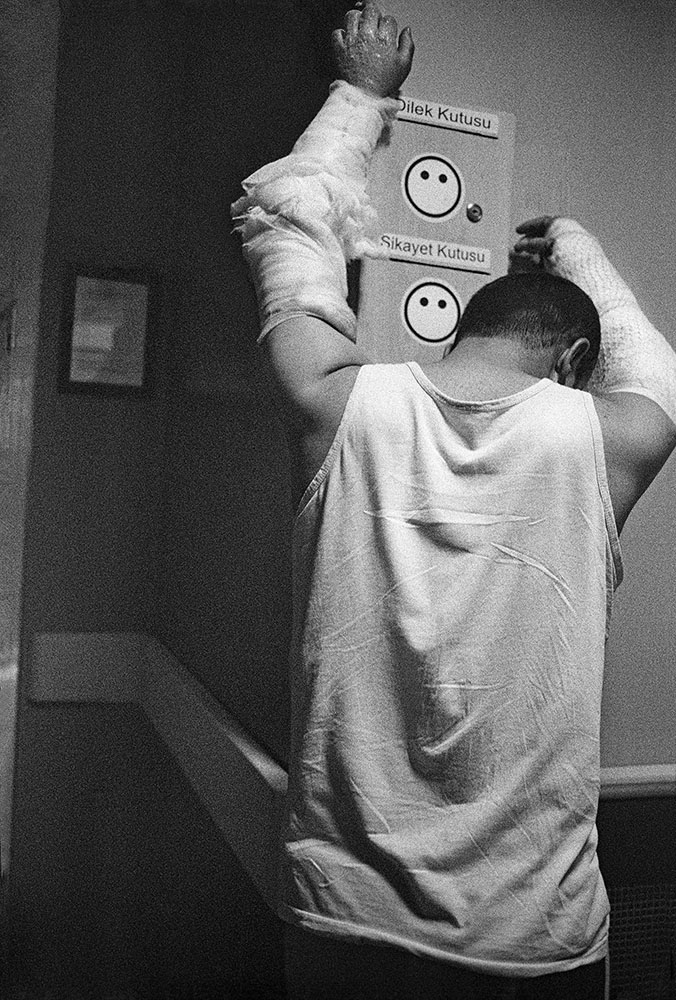 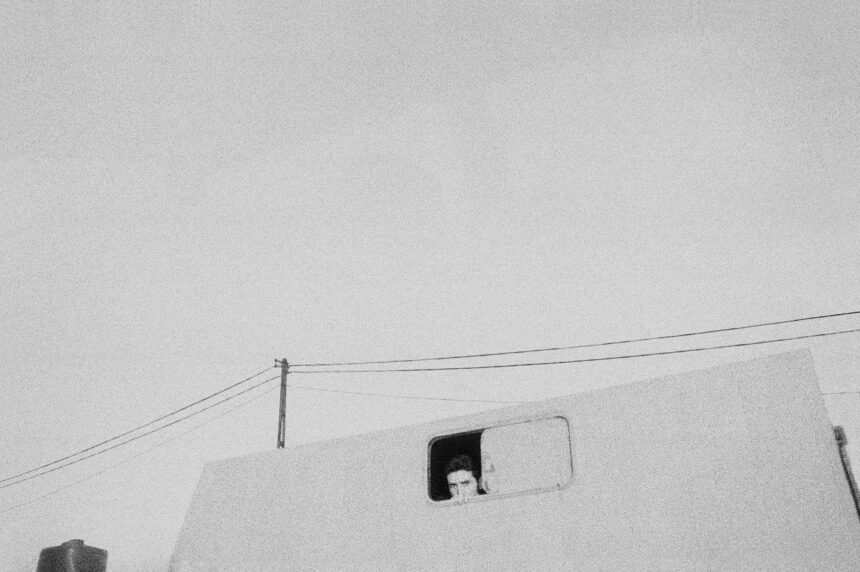 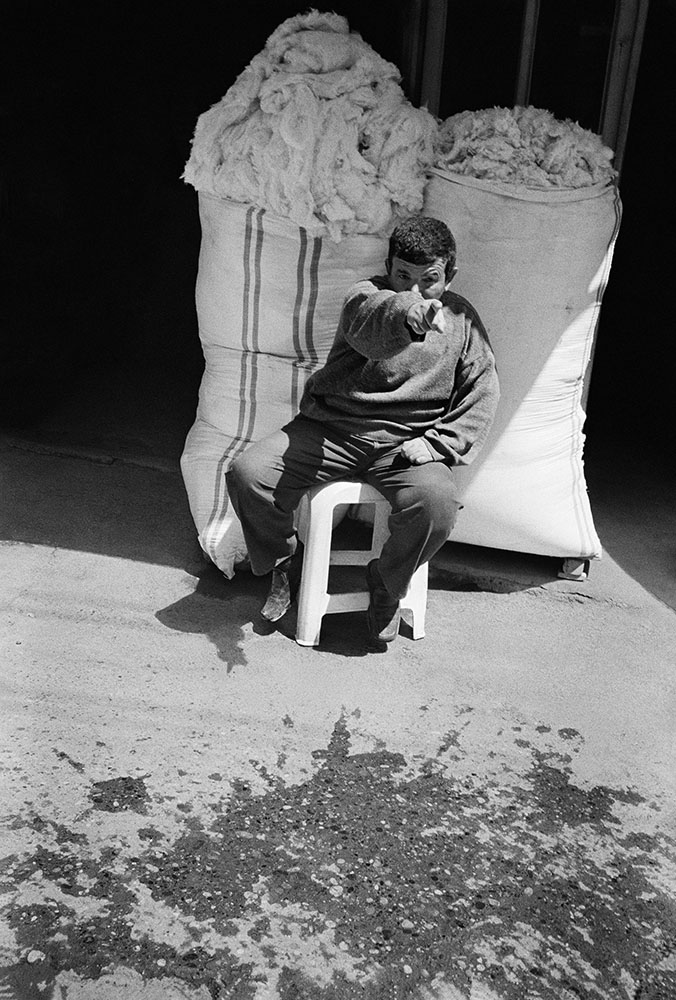 Being isolated from everything has led us to question our lives as well. On the other hand “Laki” is you, like others, in this exhibition, isn’t it?

The photographer might be more on the forefront in some images. We can say these photographs are the ones that question the witness more.

The old man from my work named “Friend” next to “The Tattooed Girl” and my deceased father were in the same class in elementary school. He has a face which is intolerant to injustice. To me a face is not only genetics, it is like handwriting. It is formed afterwards.

What about those with poker faces? Do they constantly hide something?

I don’t think so. I am not sure but facial muscles must be developing while we are asleep. Maybe they are taking form out of our control.

Can you say, looking inwards, that “Laki” is more intolerant?

No, but I can’t read some things, at some point they are starting to get blurry. After the pieces are hung, I look at them with a different eye. When you use images of people, unavoidably, you make them question themselves and then you start to question yourself, I guess it’s for equality… Is that why it appears to be intolerant?

Maybe. You don’t ask for permission before you take their photographs, do you?

I don’t ask for permission. Because then they wouldn’t look like the “thing” I want.

What about the piece next to it? The piece called “Tattooed Girl”, is it from Turkey as well?

Aside from “OJ Simpson” all of them are from Turkey. I asked why she had got such a tattoo; she had said that she liked “Swastika” as a shape.

How much of your works are affected by the spirit of the past?

You said pictorial language. Why not photographic or visual language?

They add up to the same thing but the definition of pictorial language is wider. And photographic language doesn’t provide what I am asking for. In the first hand growing years of photography, it actually had nothing to do with photography. In fact, during the first years, especially in terms of aesthetics, it didn’t contribute to itself at all. Nowadays, I think it is still limited.

Doesn’t the fact that this medium progressing over a pre agreement makes it a different language? In photography, the fact as if you are/were there is more in the foreground. Photographs have an impact to make you say, “Someone was there and witnessed this image.” by its’ reliving effect, whether it is fictional or real. Don’t you think this makes it a different language?

It sure is more capable of transferring some things but the language is the same language. Photography has a deceiving feature. It cuts across the neural system. But the concept of the reliving effect that you mentioned exists in any medium related to the figure itself.

I don’t think being competent makes it a different language. There used to be an evidence-like feature that makes the photography different, but it looks like it came to end as well.

These kinds of dialogues are mostly made for positive publicity. But you tend to do the opposite. Why am I the one who is defending the photography?

Of course I am not despising, I am only trying to understand. The time that we are passing through is to look over. Photography, in general, is a discipline which is questioning and invites others to do the same. Then why is it not inquirable itself? I am questioning myself and others, then why not question what stands in the middle? For me, it doesn’t have an untouchableness.

I notice that you are questioning the capacity of photographic medium in the works that are exhibited as groups.

Actually, it isn’t the same thing. They have a mocking attitude.

Why did you want to mock with that?

So that the process doesn’t take me under its’ control. To remind myself what I am doing is not for a purpose or responsibility. Taking photographs, selecting and processing them are very different processes. During the editing phase, you are losing your touch with reality and feel as if you are saving the world.

At this stage, there are a lot of baits to make you think that they’re all parts of a bigger story. You get the impression that you are doing a service, whenas there is no such a thing. Those games are exactly there as reminders. I don’t like to repeat, but I’m sure that me and lots of other photographers, are thinking that we are writing novels when we are working. When it comes to an end, we are adapting short story rules to this situation. Like the format used in popular cinema, where every element is important and supports one another. It works but is not enough. And when I see that it is not sufficient, not to get crazy, I am walking up to this game.

It can’t tell a story from beginning to end.

Yes. Photography is outstanding at asking questions and triggering the imagination of the audience. What makes photography so special, I can define like this: “You are murmuring in your sleep and somebody understands what you mean.”

Some photographs need an explanation. For example, your work called “Mete.”

Actually it doesn’t really need explanation. I just like to talk about it.

The person in this photograph is your uncle.

Did you take this photograph?

I couldn’t have taken it; I was too young the year it was taken.

Why did you include it in your exhibition?

I wanted to see it standing next to my other works. Because it is as if this photograph fills a missing place in my head.

He was deaf and speech impaired, was a photographer, and passed away at a young age from a rare disease. Do you think you are a photographer because of your uncle?

I definitely believe he had a strong impact. Now I understand better, how traumas are directing us. Probably if there wasn’t for the longing my family felt for him, they wouldn’t let me become a photographer.

Trauma is an important constituent of “Laki”, right? Why did you pick the name “Laki”, which means “Moral Police” in Lubunca language?

Lubunca is a language born out of oppression, danger and the need for hiding. The images in the exhibition are revolving around these concepts but those who are using this language are included in the exhibition indirectly. Precisely, they are compelled to hide, they should not be seen and heard.

Do you see this exhibition as a part of the LGBTIQ+ movement?

LGBTIQ + and especially trans people are long-standing victims of the culture of shame, I am honored to use this word for the exhibition. There is no comprehensive and explanatory aspect of “Laki”. To me, the LGBTIQ + movement represents much more than itself. “Laki” reminds me that all “others”, including myself, might have much bigger difficulties in the future. I am also aware that this exhibition will not raise any awareness.

I am aware that you want the photographs which have balls in them to evoke an association to homophobic swearing. Are you worried about being misunderstood?

I have no such worries. I want to draw attention to what swearing is and for what purpose it is used. Swearing serves to keep people away from each other. The wounds caused by these words also break apart societies. This is far greater than the damage they cause on a personal level. A society that associates many things about sexuality to shame may not look at theft or murder in a similar way. This is very interesting to me, as it is to many people. You can develop a personal consciousness in what is called the guilt culture.

The concept of the wrong and the right concerns you more, then you can say “Why do you care about my life?”. In cultures of shame, the question “What will others say?”  is more in the foreground. I do not want to be concerned with what others will say. I am also someone caught between the culture of shame and the culture of guilt. I often confuse guilt and shame. I can’t comprehend that they’re different. I was raised like this through my education and my family.

What about the culture of fear, the thoughts of what will happen to me?

I’m not there yet mentally. I don’t think it has taken over my whole personality yet. My mind sometimes tells me that I should be afraid, but I guess it hasn’t touched me so deeply yet. I do not feel the traces of the culture of fear in others as well. If we can’t put up a fight against being ashamed, I’m sure we’ll go there altogether.

What do you think about “shame” itself?

I think, whatever it is, it exists to survive and adapt. All of our senses and instincts are for survival. But we are complex creatures in need of self-understanding. Analyzing and understanding are also taking a part in our fight for staying alive. We need to see and understand, what it is, the feeling of guilt and shame that we transfer to other people. It’s important to know what embarrassing or guilty things are and how they come to the life. This is a tiring job. To be able to observe yourself, to stop yourself, to try not to spread it around even if you cannot stop it… It is important for institutions, that claim to work not only in personal levels but also for the interest of others, to inspect themselves.