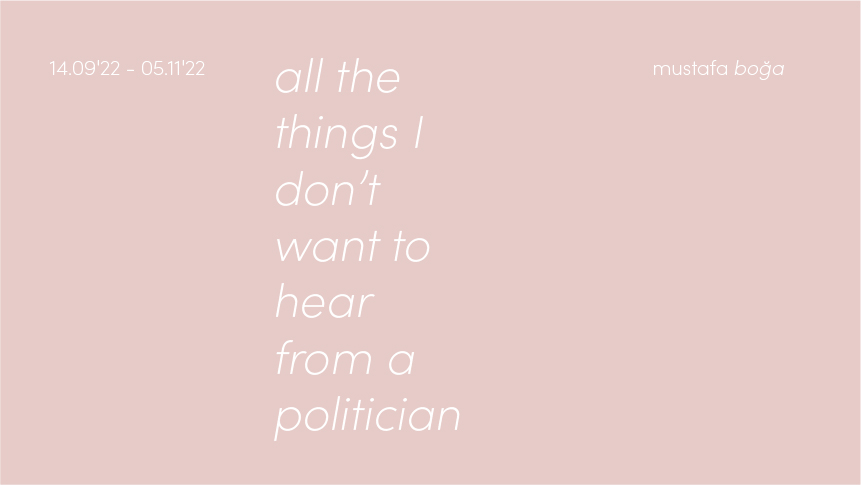 The transformation of cultural and intellectual phenomena into creations through artistic or daily use items is possible within the framework of both the world individuals perceive and the opportunities offered by the geography they live in. Therefore, at the point of ethnographic or artistic production, what societies have done in the past, and what they have lived, is closely related to the future context, and therefore to what they do in the current period. At this point of a close relationship, Mustafa Boğa’s solo exhibition titled “All I Don’t Want to Hear from a Politician” is a confrontation and awakening.

A deep and disturbing injustice, oppression and subliminal references underlie the whole life of our age. The false assumption that people are actually equal, every step we take between people reveals from such a realistic perspective that the opposite is true, every step turns into a painful stumbling block and what remains is the sting of awakening.

Signs and miracles of moral reform, overshadowed by vile passions in politics, are clearly emphasized in the awakening of new sprouts in our age. As Gasset has stated, “It cannot justify its existence by reproducing the truth, making a second copy in vain, nor can it be limited to it. Its task is to open an unreal horizon. In order to achieve this, there is no other way but to deny our own reality and to overcome it with our act of denial.”

Mustafa Boğa’’s wall panel made of flowers, knowing that it will lose sight of its message and vitality in a very short time, invites the audience into that fake world. When the effort to be heard is combined with the material of the work, it offers a questioning view of what we want to hear from a politician or what we are promised turns into a temporary show subject and our moment of confronting the facts. In the verses, the epoxy sculptures created with the belief of protection hoped to spread to the future, the present and the whole of life, and their efforts to exist in contrast bring to mind the question “What is left for us, from us?”

Boğa designs a confrontation by presenting traditional quilts, which have hosted different stories independently of each other, with images that are very familiar to us. It whispers in the ear as if it wants to say “face your fears, meet the dominant power” on the journey that comes to our subconscious with the very familiar images embroidered on the quilts that reveal the oppressiveness and weight of the quilt when taken on.

All the bullying we are exposed to has also been set up on us at a certain point. And the fact that the quilts, which are the subject of pressure, are called as protection and comfort areas in sleep without being aware of it, and the action is never seen as a pressure regime. There is always a need to take shelter behind a nostalgic element with a beautification arising from this illusion of perception. However, the awareness of waking up from sleep as a result of the reality and flexibility of the image confronting us with our subconscious, while drifting towards the past on the bridge formed by the contemporary and the traditional, hits our face with the reality of the current.

In the installations formed by layering the photographs in traditional family archives, the purely political and class distinction of my momentary monograms, which we call photography, draws attention. Each work shows that Boğa’s own photograph, which is layered, takes the form of a stance in the transmission from generation to generation.

The installation, which reflects the moment when the woman and man are equal, within the frame created by the photograph to be placed on the official document from the government office, is faced with the pressure of the woman in the traditional family structure in the dominant masculine hegemony in social life.