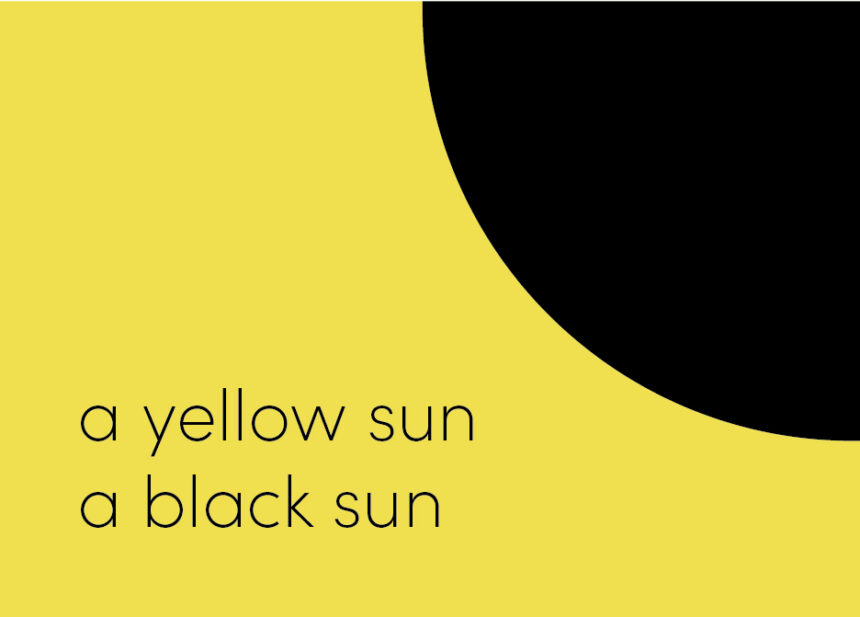 ‘A yellow sun a black sun’ is an exhibition about the sun’s dual nature as both life-giver and fire dealer, as described in Etel Adnan’s book of poetry, The Arab Apocalypse. In the works exhibited,  the yellow sun unveils the beauty of Lebanese mountains, Roman and Greek temples, gods such as  Helios. It produces golden, yellow, white, pink, and orange light as in Genadry’s work. In contrast,  other works show the destructive nature of the black sun dominating Beirut’s sky, with its  incendiary power inscribing the city in a cycle of violence, and each trip around the star bringing

new fires and destructions with it.

Adnan’s representation of war is set in motion by the sun’s dual function as life/light-giver and  death/fire-dealer. Light produces scores of offspring then rays become bullets, and missiles.  (Simonton)

Etel Adnan wrote L’Apocalypse Arabe, in its original French, between February 1975 and August  1976, during a crisis that later became the Lebanese Civil War (1975–1990); it has been said that  this work “intuited the war”. The poems are an urgent response to the 1976 siege of the Tel al Za’atar Palestinian refugee camp, and the subsequent massacre that took place there. The siege of  Tel al-Za’atar lasted fifty-nine days, hence the poem’s structure: “the living had slept 59 days with  the corpses 59 days. 59 days ‘. When asked why she chose the sun as The Arab Apocalypse’s main  protagonist, Adnan replied by saying: “I don’t know how children dream, but in their drawings,  there is very often a sun. The sun is extraordinary. Just like a sunset when the whole world  becomes a festival of colours. We have created cities and architecture which no longer expose us to nature. She adds ‘ It was January 1975. One day I took a pencil and a piece of paper, and I said to myself:  I want to write a poem on the sun. Totally repetitive: the sun, the sun, the sun. I wrote the first  page, and it stayed in my drawer. Then, in April 1975, the Christian militia, the Phalanges, killed a  whole Palestinian busload. I got cold, I knew this would cause big trouble in the city. ”

Although more than 40 years have passed since these poems were written, they are still very  relevant in their descriptions of the duality within Mediterranean cities life such as Beirut, which is  still experiencing violence, war, and destruction, the last incident being the massive blast on

August 4, 2020. Despite its darkness and violence, this cycle of pain happens in the most beautiful  scenery, under the golden light of the sun and the bluest sea of all, the Mediterranean sea.  Humans of this region—Mesopotamia—created mythical figures that initiated similar hostilities  such as Samas (the Sun god). This replicating, perpetual motion machine bears witness to a sense  of cruelty that further spreads the cycle of violence. All this imitates the big bang birth of our solar  system, whose centre follows its 10 billion-year lifespan by nuclear creation and death by nuclear  destruction.

In the Fertile Crescent, the sun dictates cosmic order; “the Rider of clouds” sows his generative  seed in the body of the goddess. Helios, Baal, Marduk, and Bel all appear in The Arab Apocalypse,  as do myriad consorts (Anat, Ishtar, and Isis)—the feminine principle of the moon, fertility, and the  sea. (Simonton)

According to scientists, life on earth is fueled by the sun and plants constitute this reservoir  transforming sun rays into energy. Plants are a living example of the theory of heliocentricism,  which places the sun at the centre of the universe. (Coccia)

The photographs of Nadim Asfar bear witness to the profusion of life in remote places far from  humans. For 10 years, Asfar captured images of Lebanese mountains. Amongst the rocks and  trees of Mount Hermon, he photographed the lonely Roman Temple of Ain Hersha, with its Greek  inscriptions and sculpture of the god Helios, a lost tribute to the sun.

Mount Hermon was first mentioned as early as 2000 years before Christ in the Epic of Gilgamesh  and is considered by many to be an axis Mundi, where cosmic energy is felt through special  magnetic fields.

The film ‘Sun Rave’ by Roy Samaha speculates on the theory of heliocentrism, placing the sun at  the centre of political and social revolutions, with each solar storm affecting human reasoning and  history on a massive scale.

In Lamia Joreige’s film titled ‘Sea & Sun’, she films images in Greece that enter a dialogue with Etel  Adnan’s first poem written in 1949. The sound of waves and the golden light reflected on the blue  sea show a peaceful landscape, but the words of Adnan reveal a hidden struggle between the sea  and the sun, and as in many of Adnan’s poems, the threat of an upcoming turmoil is never too far  away.

The apocalyptic sun made its way to Beirut. Artist and historian Gregory Buchakjian conducted a  seven-year-long research project from 2009 to 2017, recording typologies of abandoned houses.  The images taken from section 3.1.2 from an inventory of 10.770 photographs, represent burned  ceilings, walls, and clothes. Captured in a Beirut burned by war and militias, by negligence and  fires, these images are enigmas as to what happened there and why.

In the film Lost/ Won by Sirine Fattouh, 100 women answer the question of what they lost and  what they won in life. The work looks at the duality of life itself, as many discuss the difficult living  conditions of women within middle-eastern societies, others mentioned the losses suffered  during the 2006 war which destroyed many houses in South Lebanon.

Victory over the Sun

Helios didn’t just punish Beirut but the entire Levant region and many countries became brothers  in misfortune, suffering from war, radicalisation, corruption, emigration, and colonisation… did the  Levantines attempt to join the modern world and failed? Did they fail to take over the Sun? In the  avant-garde opera Victory over the Sun, written in 1913 and performed in Saint-Petersburg a few  years before the October revolution, the advent of the new world is announced in a pseudo-language called “zaum”. It is a world where man and machine would conquer ‘the sun’ together.  The point was to abolish reason through abstract language and destroy time by catching the sun.  Did they catch the Sun? Did the Levant fail and cyclical time become endless and all the worlds  continue to collapse?

One thing is certain, the sun has claimed a victory over Beirut.