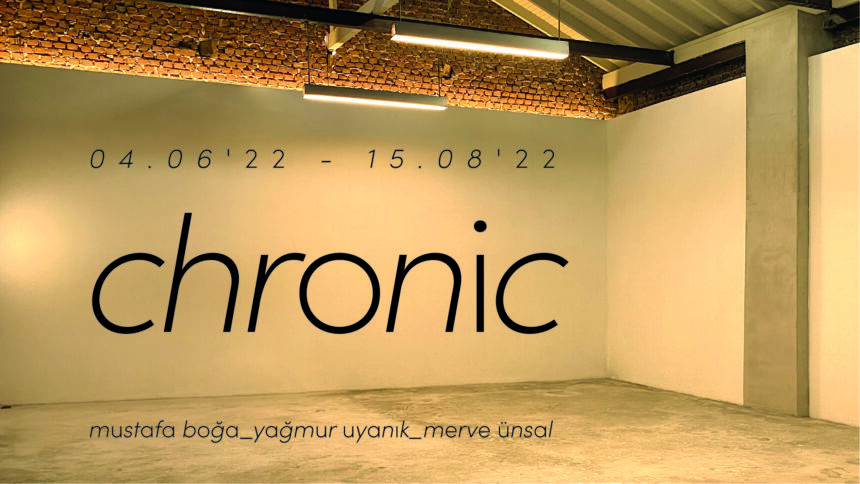 Martch Art Project is pleased to announce that the Chronic exhibition, which brings together the practices of Mustafa Boğa, Yağmur Uyanık and Merve Ünsal, hosted by Martch Art Studio in Ayvalık in 2022, will open on June 4th. The exhibition, which can be viewed until August 15, will showcase the works produced by the artists during their residency program.

Using different mediums such as photography, video, performance and installation in his work, Mustafa Boğa transforms roles such as observer, narrator, and transmitter through images of his personal life and childhood, creating a space where the perception of the audience is re-established through contemporary art. Boğa positions the weaving carpets he produced during his time in Martch Art Studio, at a point between the production and consumption of the temporality of the image, by processing the familiar and everyday images through the slow rhythm of carpet weaving. The anti-iconic subjects embodied in these iconic images point to the discontinuity of the sequence of moments that the artist weaves and the endless gap between memory and transference.

Yağmur Uyanık explores in her practice different ways of understanding the relationship between people and the world, the transformations in information production systems, the changing position of objects and tools, and their spatial contexts. In her works, Uyanık uses sculpture, video, audio mediums and mostly contemporary technologies, and conducts thought experiments investigating the relationship between technology and the history of information production. During her time in Martch Art Studio, Uyanık produced Echoic chamber, which aims to act as a potential space-specific auditory interface, based on the notion that the transformations of perception forms expand the scope of knowledge about place and space. Echoic chamber is a modular installation that imitates the acoustic foam material commonly used in sound insulation and reverses this material’s function by having been produced with metal and it increases and expands the already existing echo in the space rather than damping it. This modular object, which fits completely on the venue’s two windows that open to the street, amplifies the sounds coming from the street while blocking the light, opening a space for the transformation of the visual into the auditory within the space; what transforms the aural disrupts the visual.

Researching the boundaries of photography and text in her works, Merve Ünsal works on the moments and situations when what is not conveyed turns into something that cannot be conveyed. In her works, which are always image oriented, she thinks through site-specific installations, in addition to photography, video, and sound. Ünsal, who recently has been tracing the manifestation of wind in land in her work, deals with the relationship of the wind with breathing and blowing together with the clatter, rattle and creaks coming from different parts of the building, with Murmur which she produced during the Martch Art Studio process. Establishing a relationship between the blown, whispered breath and the corporeality of the building through fear, Murmur, which is a proposition about what can be blown with fear, consists of objects made of blown glass and inspired by wind instruments. These objects, which cannot exactly perform the function required by their form as expected due to their materials, are built on the relationship between what the object can hold and what it can imply.

Mustafa Boğa, one of the artists of Martch Art Project, stayed at Martch Art Studio between January – February. Yağmur Uyanık and Merve Ünsal stayed together at Martch Art Studio between March – June 2022 as a result of the open call made in January 2022 and through the occasion of this artist residency program, started a dialogue which led to a production process on the spatial possibilities, limits and insistence of the sound.

haze on the horizon