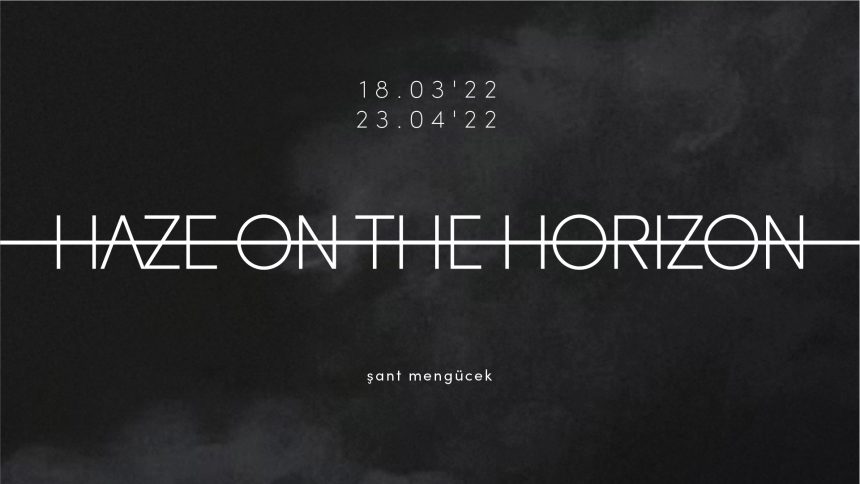 haze on the horizon

The Field of Hazy Paintings

The paintings in Şant Mengücek’s exhibition Haze On The Horizon exist in a hollow. In the works that are curled under the visible and trying to dismantle the existing, there are different series of signs in the meanwhile. In other words; there are actions of suspense in the positions where the paintings stand. Then we can mention the state of the artist carrying certain tensions to the surface. Şant Mengücek is in an effort for the walls to be damaged walls and the fences to be open by establishing different worlds.

So what does it mean for an artist to establish worlds?

The outburst in the paintings is an intervention that concerns creating tension and turning representational structures upside-down, which we could also call an outward sprawl.

On the other hand, the artist does not pretend to stand in front of the power-filled worlds which he paints. On the contrary, he doesn’t mind looking into the eyes of the dark fields that are formed because he lives there. The paintings in the exhibition serve as answers to the issues that the artist himself has seen and experienced. So much so that, Şant Mengücek is not afraid to hold his brush against the darkness by depicting the forms of oppression that occur in social spaces and surround the crowds. In his works, phenomena such as technology addiction, bureaucracy, environmental pollution and workers’ struggle are visible. The plots created in paintings dominated by chaotic figures, objects and dark/hazy colours create various signals. Here we are on the threshold of the worlds that Şant Mengücek has built. In other words, the problems we experience are expressed with different visual arrangements whilst being addressed. Thus, while the artist’s aesthetic perspective pierces the chaos, he invites the audience to discuss these dark surfaces. In this respect, every painting is worth being portrayed as a plotline. The exposure to exploitation which causes feelings such as grief and pain turns into a flow of meaning in the exhibition. There are changes in scenes regarding forms of oppression. The plots that emerge and contain power rhythms are hidden in the stances of the figures in the paintings.

The titles of the works in the exhibition especially underline these imposing, domineering and dominating dynamics: Follow the rules, ‘Confusion’, ‘Thirsty’, ‘The Overtime’, ‘Sacrifice’, ‘Journey of the commoners’, The last hope is the under the ashes’, ‘While the masked man grows up’, ‘Ripped apART’…

The artist, in the exhibition Haze on the Horizon, does not back down from showing our own fragility, the dangerous arrangements that surround our lives or fragments about the trajectory of the world.

This question is beside us as the exhibition exists in a hollow: How does potency function?